Soldier (formerly Vanguard) Shepard has, once again, saved the galaxy. All in all a very satisfying game, with an exciting and engaging conclusion. I enjoyed Mass Effect 2 more than its predecessor; the first had the unenviable task of providing the setting’s ludicrous amount of background, which it pulled off with aplomb. But the pacing, the character focus, the humour of ME2… all in all, they make it a much more accessible and enjoyable game. It deserves more than one run-through. So, for the sake of symmetry, I promptly imported my ME1 Soldier to become a Vanguard.

Vanguard is not terribly high on anyone’s recommendations for ME2, it seems. Still, I was drawn to it for the same reason I loved warriors in WoW, and why Excalibur was always my favourite in Warframe: the ability to charge across the battlefield and test one’s brute strength against the enemy’s miserable tracheas. Or, you know, trachea-like protrusions. We’re being inclusive here.

So, how’s it going, one might wonder? Well… let’s give an explanation in the form of a delightful and whimsical pictoral journey through the average fight, guest starring Renegade Commander Bloodlust the Totally A Vanguard All Along, You Guys. 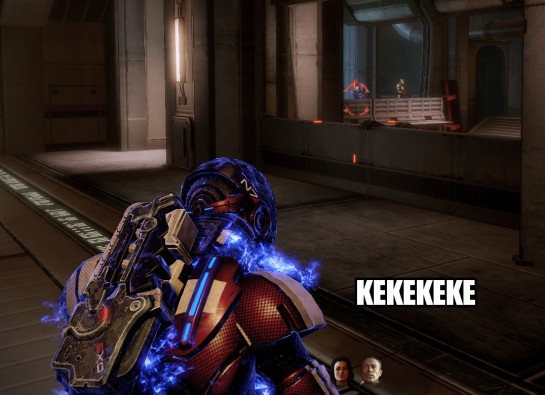 If you can’t see Shepard, you may be only moments from gruesome dismemberment.

First, the setup. Pick a target, preferably behind some handy cover. Try to flank the enemy, wherever you end up; the Vanguard offers unparalelled ability to use the enemy’s cover against them, and to pick off the isolated and weak.

Or you could scream a mighty oath to the Blood God, and charge at the toughest thing on the field. Like a real N7 operative.

I am a pretty, pretty peacock.

Next, hit The Button. At this point, Shepard’s trademark hallucinogens kick in. You will feel a great pressure building behind you; power, in a wave to sweep all before it. You may hear voices. This is normal. Everything is okay. Everything is all right. It is all proceeding as the World Tree had foreseen, and whispered to the Elders that they might preserve its wisdom. This is the day. It’s all coming together now. 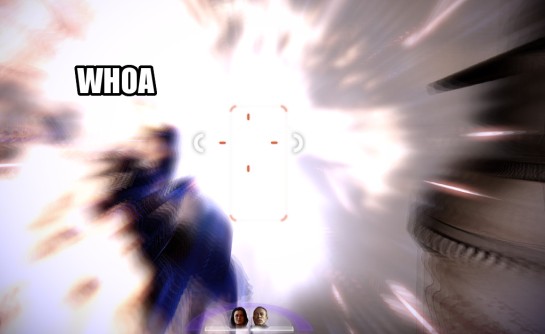 Lo, there do I see the line of my people, back to the beginning.

This is the important part. Shredding through the feeble gauze that we cast over ourselves and call “reality”, you are cast adrift in time and space. You will feel a rushing sensation, and be permeated with the deep knowledge of the ancestors. Do not join them; not yet, it is not the hour.

Life is what we make of it. Shepard chooses horrible burning.

Emerge changed, bursting with the insight of your ancient protectors and enough entheogenics to kick-start the Rapture. The realisation dawns, then; your ancestors were the murderous, brutal beings who clawed their way over everything in their path to ensure that one day you would stand here, having been tried and found worthy in the callous void of space. Their wisdom is flame and blood, and you will share it with your enemies. It could never have been any other way. 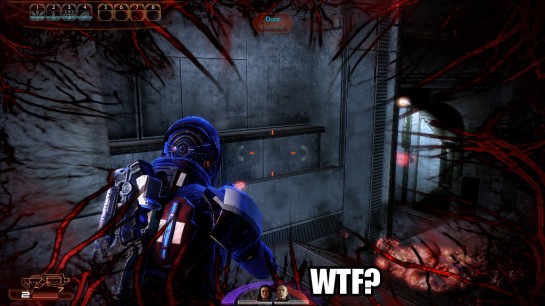 As the kick fades and you look around at what you have wrought – as the still-burning bodies fade slowly to ash – realise that, after charging into a tactically infeasible position and being brutalised by unexpected reinforcements, you still somehow have most of your shields. Even as your health is low enough that the screen looks like an insomniac’s eyeballs and the sounds all around you are dulled to a vague thumping, the world just a backbeat to the thrumming of your heart.

You are alive. You will do this again. And oh yes, you will love it.

They will be sure that you do.