Soldier (formerly Vanguard) Shepard has, once again, saved the galaxy. All in all a very satisfying game, with an exciting and engaging conclusion. I enjoyed Mass Effect 2 more than its predecessor; the first had the unenviable task of providing the setting’s ludicrous amount of background, which it pulled off with aplomb. But the pacing, the character focus, the humour of ME2… all in all, they make it a much more accessible and enjoyable game. It deserves more than one run-through. So, for the sake of symmetry, I promptly imported my ME1 Soldier to become a Vanguard.

Vanguard is not terribly high on anyone’s recommendations for ME2, it seems. Still, I was drawn to it for the same reason I loved warriors in WoW, and why Excalibur was always my favourite in Warframe: the ability to charge across the battlefield and test one’s brute strength against the enemy’s miserable tracheas. Or, you know, trachea-like protrusions. We’re being inclusive here.

So, how’s it going, one might wonder? Well… let’s give an explanation in the form of a delightful and whimsical pictoral journey through the average fight, guest starring Renegade Commander Bloodlust the Totally A Vanguard All Along, You Guys.

If you can’t see Shepard, you may be only moments from gruesome dismemberment.

First, the setup. Pick a target, preferably behind some handy cover. Try to flank the enemy, wherever you end up; the Vanguard offers unparalelled ability to use the enemy’s cover against them, and to pick off the isolated and weak.

Or you could scream a mighty oath to the Blood God, and charge at the toughest thing on the field. Like a real N7 operative.

I am a pretty, pretty peacock.

Next, hit The Button. At this point, Shepard’s trademark hallucinogens kick in. You will feel a great pressure building behind you; power, in a wave to sweep all before it. You may hear voices. This is normal. Everything is okay. Everything is all right. It is all proceeding as the World Tree had foreseen, and whispered to the Elders that they might preserve its wisdom. This is the day. It’s all coming together now.

Lo, there do I see the line of my people, back to the beginning.

This is the important part. Shredding through the feeble gauze that we cast over ourselves and call “reality”, you are cast adrift in time and space. You will feel a rushing sensation, and be permeated with the deep knowledge of the ancestors. Do not join them; not yet, it is not the hour. 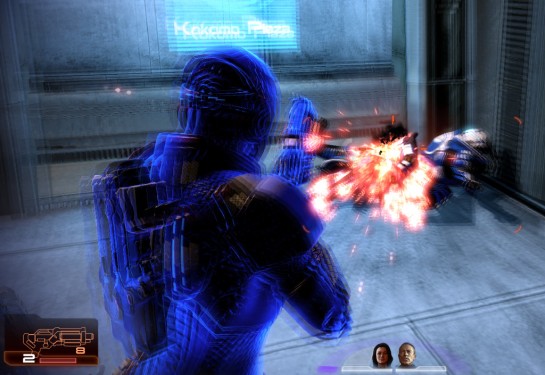 Life is what we make of it. Shepard chooses horrible burning.

Emerge changed, bursting with the insight of your ancient protectors and enough entheogenics to kick-start the Rapture. The realisation dawns, then; your ancestors were the murderous, brutal beings who clawed their way over everything in their path to ensure that one day you would stand here, having been tried and found worthy in the callous void of space. Their wisdom is flame and blood, and you will share it with your enemies. It could never have been any other way.

As the kick fades and you look around at what you have wrought – as the still-burning bodies fade slowly to ash – realise that, after charging into a tactically infeasible position and being brutalised by unexpected reinforcements, you still somehow have most of your shields. Even as your health is low enough that the screen looks like an insomniac’s eyeballs and the sounds all around you are dulled to a vague thumping, the world just a backbeat to the thrumming of your heart.

You are alive. You will do this again. And oh yes, you will love it.

They will be sure that you do.

It must have been a month back or so, I reckon. Stranger said he was ready, that he’d carry on the line. That he was going to play it… that it was time for Mass Effect 2.

Sometimes us folk wonder whatever happened to that poor deluded soul.

Okay, elaborate dramatics aside, I actually did run into a little trouble starting up with ME 2. From the start, it’s pretty clear that the game is very different from the first, at least in terms of its combat systems. As an example: I actually played a Vanguard up for the sole purpose of importing the save into ME2, and then promptly turned her into a Soldier, simply because Soldier was a literally nigh-invincible battering ram in the first game.

Didn’t take too long to realise that Bioware, in what was probably an eminently foreseeable move, had excised the skill that had resulted in said capability. Oops. Shepard is also a lot more fragile – shields fold in around a second of sustained fire, and the character has become some sort of concrete-based vampire or perhaps an exotic slime mold, attaching to cover in order to rapidly regenerate a health pool that otherwise lasts approximately as long as a puddle of piss in the Sahara. 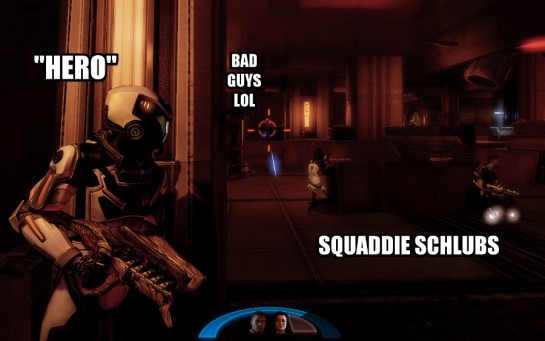 A cross-section of your average fight.

So, being the intrepid and self-reliant challenge gamer that I am, I gave up.

No really, I went and played some Disciples III instead, since I still haven’t finished the blasted game, what with having no motivation to get past the self-righteous elves and their campaign. The mission that’s been holding me up was literally going to a human fortress and kicking them out of the homes they’d built over generations. This because some pointy-eared bint insisted that it would help mitigate the approach of some nebulous evil.

Anyway, after finishing that scenario and experiencing the joys of playing an elf slumlord, not to mention being teased a fight against a dragon but having no such fight materialise*, I went back to the stars. Via the Mass Effect wikia.

It feels a bit like cheating. See, I’m not terribly comfortable with walking in incompetent. I’m especially unhappy with the idea of missing out on upgrades, or rather of achieving a less-than-ideal result at all, both of which are a serious possibility in this game. Gone is the random loot – instead, the upgrade or resources that you miss in a mission may be lost forever. So yeah, I went and looked at some build strategies, and I look for upgrades in the missions before the shuttle even leaves the docking bay.

Thing is, I’m enjoying the game. There’s something that sits on the back of my neck and whispers “efficiency, you missed it, you’re doing it wrong” otherwise – but with the aid of these outside resources, much progress has been made. And hell, it isn’t like the game’s design is actually such that it’s really necessary to look this stuff up – being much more action-based and linear than its exploration-minded elder sibling, simply being thorough would net everything in the game so far. So it’s just a peculiar mental crutch.

Which doesn’t make it feel any less like cheating.

On the plus side, the combat in ME2 is much more entertaining… which it would really have to be, given how much more of it there is. Where ME felt like a story-based game that let the player largely take their own direction, the sequel is very character-focussed, and has dropped planetary exploration entirely in favour of mission-based gameplay – the dreaded corridor shooter disease. Ah, but these corridors are so very pretty, and can be even prettier. See, Soldier Shepard has access to an ability called Adrenaline Rush. Personally, I’m not convinced that’s adrenaline… 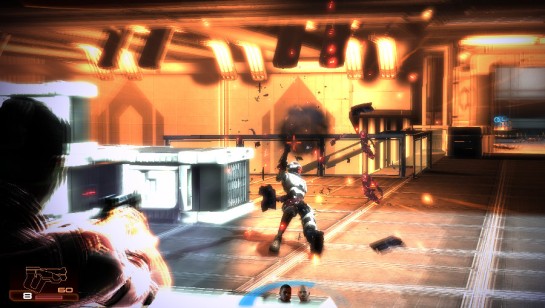 See, to me that just looks like Commander Shepard has access to the very best drugs. And it just keeps getting better as the game goes on…

Bow before me, puny miscreants!

…until it’s getting so stylised that you’re not even sure that anyone’s occupying a reality congruent to that of the good Commander. 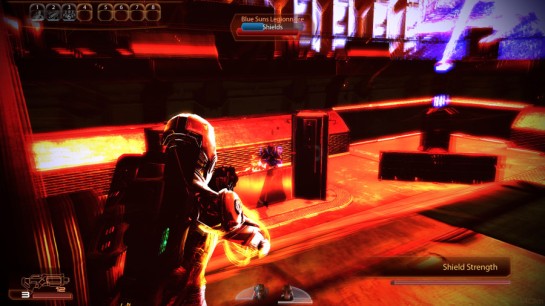 VTec just kicked in, yo.

Fortunately, I adore bright colours and delightfully warped environments. Very fortunately, as it turns out, since the active nature of combat means that you’re hitting this Dreamtime-device promptly every ten seconds or so. This is the Soldier’s new gamebreaker, the ability to slow time and do extra damage. So yeah, I probably would have been just fine that first time around, before I pussied out. I just didn’t know it yet.

* Dragon blue-balls are the worst blue-balls. Ask any DnD player.